With a comprehensive service portal, the advertising broker Publicitas enabled its customers to book advertising orders in various newspapers and magazines throughout Switzerland. Its main advantage was based on the «one order - one bill» principle, which allowed unlimited advertising in advertising media and the issuing of a total invoice.

Due to the structural change in the (Swiss) press market, Publicitas was confronted with a sharp decline in commission income. These changes led to its bankruptcy in May 2018 and thus to the disappearance of the important advertising platform.

The disappearance of the Publicitas portal created an obstacle for many advertisers in that much more effort had to be put into placing advertisements, since only direct bookings with the corresponding publishers were possible.

For this reason, Woche-Pass AG, which itself publishes two free advertisers a week (Woche-Pass and Wochen-Post), set itself the goal of developing a comparable platform. The «AdManager» is intended to be an online tool that will again enable advertisements (primarily for real estate service providers in the core area) to be placed in advertising media throughout Switzerland. In addition, the integrated «Web-to-Print» solution simplifies the design and processing of data. 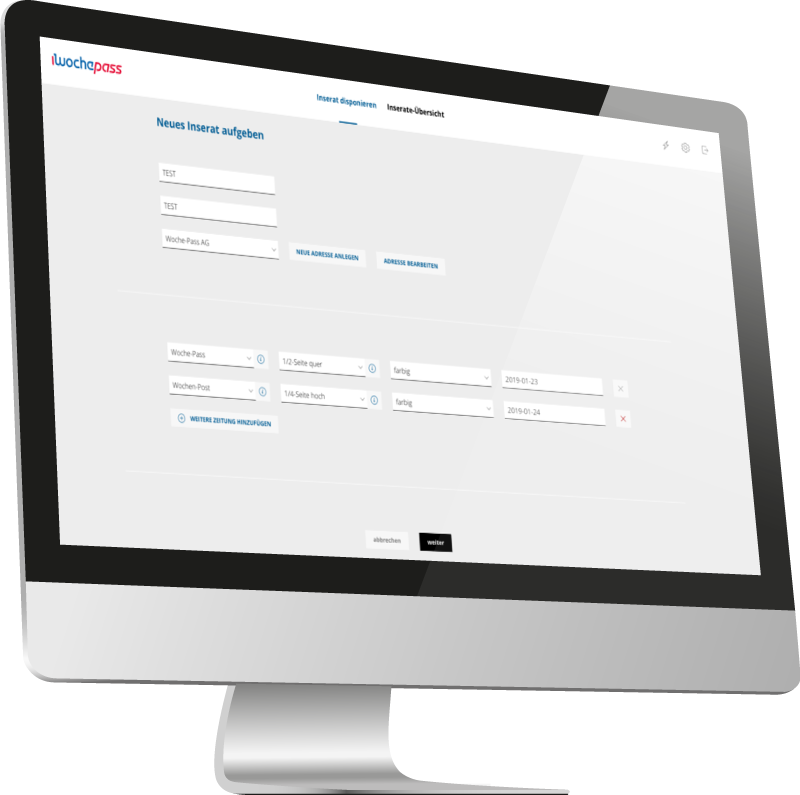 The primary requirement of the platform is to present as many newspapers and their media data as possible in a clear and concise way and to provide a simple administration of the data. With the DAM and PIM system from Pimcore this was easy to realize and could be built exactly according to our ideas.

The new portal «AdManager» of Woche-Pass AG, which was designed and developed by w-vision AG, impresses with its user-friendliness and implemented ad processing function. The first companies with a uniform advertisement layout are already designing and booking numerous advertisements in 20 advertisers and 8 combinations of the region using our tool.

Furthermore, the platform has an XML interface to the «Web-to-Print» solution from «one2edit». This makes it relatively easy to edit InDesign documents in a web interface and then generate printable PDFs from them. However, it was not possible to set the permissions within the editing interface of «one2edit» according to our wishes. For this reason, the processing was implemented in such a way that the printable advertisements can be filled via HTML form. This enables the customer to fill the advertisements himself simply, cleanly and quickly, thus saving time, money and also a graphic designer.

With eight experienced Pimcore developers at our site in Sursee and countless successfully implemented projects, we meet the requirements for the Pimcore gold partnership. The highest partner status means for us above all an even closer contact to the software manufacturer and for our customers always up-to-date technical know-how at first hand.